14 December 2018 – Paragon Partnerships, supported by ESOMAR Foundation, won the MRS President’s Medal which is awarded annually to an organisation that has conducted extraordinary research but who might not be recognised through the usual channels. 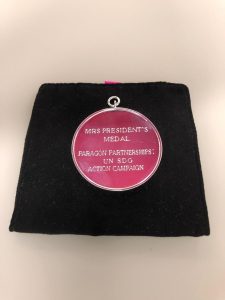 On choosing the winner, Jan Gooding, President of MRS, said:

“I was immensely impressed by what was achieved on a voluntary basis. It was a huge act of generosity on the part of everyone involved. At a time when the UN can find itself justifying its work and existence, when the problems in the world are so huge, this kind of collaboration to provide evidence of effectiveness is something to be celebrated and applauded.” 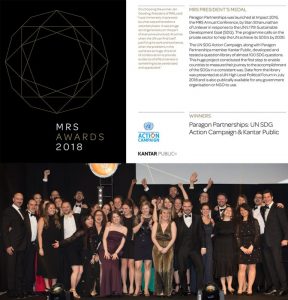 The programme calls on the private sector to help the UN achieve its SDG’s by 2030. The UN SDG Action Campaign, along with Paragon Partnerships member Kantar Public, developed and tested a question library of almost 100 SDG questions. This huge project constituted the first step to enable countries to measure their journey to the accomplishment of the SDGs in a consistent way. Data from the library was presented at a UN High-Level Political Forum in July 2018 and is also publically available for any government organisation or NGO to use. Read more on Paragon and its relationship with the ESOMAR Foundation.

The UN SDG Action Campaign is an inter-agency special initiative of the UN Secretary-General to scale up, broaden, and sustain the global movement to take action for the SDGs. The UN SDG Action Campaign aims to mobilize and inspire individuals and organizations to take action and join the global movement for the SDGs, while connecting people’s actions and perceptions with decision makers in SDG planning and review processes at all levels.

Paragon Partnerships was launched at Impact 2016, the MRS Annual Conference, by Stan Sthanunathan of Unilever in response to the UN’s 17th Sustainable Development Goal (SDG). The programme calls on the private sector to help the UN achieve the SDGs by 2030.

The Market Research Society (MRS) is the UK professional body for research, insight and analytics. MRS recognizes 5,000 individual members and over 500 accredited Company Partners in over 50 countries who are committed to delivering outstanding insight. As the regulator, they promote the highest professional standards throughout the sector via the MRS Code of Conduct.