Winner of the Most innovative NFP case study of our Making a Difference Competition. This project was carried out by Surgo Foundation in partnership with the Bill & Melinda Gates Foundation and the Clinton Health Access Initiative

“Huge potential impact in India and internationally where diarrhea kills large numbers. This is a really excellent, thorough and innovative and effective piece of research”

Diarrhea is the second leading cause of death among children worldwide. It kills mainly by causing dehydration. Fortunately, a simple, cheap, and scalable solution exists – the use of oral rehydration salts (ORS). Yet India sees more than 200,000 diarrheal-related deaths every year. Its most populous state, Uttar Pradesh (UP), accounts for a substantial portion of these.  ORS is available and relatively inexpensive in UP, but surveys showed that only 30% of children with diarrhea in the state were treated with ORS. Why were children not receiving this potentially lifesaving medicine?

In Uttar Pradesh, India, 84% of caregivers of children with diarrhea seek care from rural medical practitioner (RMPs) – informal community providers who often lack medical training. Several organizations trying to tackle this problem hypothesized that improving RMPs’ access to ORS and informing them about best practices for treating diarrhea would significantly improve the uptake and use of the treatment. A statewide program was begun to provide ORS directly to RMPs at prices that would improve their profit margins. This was combined with training RMPs on how to prescribe the treatment properly. However, after three years of investment, levels of ORS use among children had not improved. Surgo Foundation began working on the project with the aim of answering the ‘why’ – why ORS uptake was so low? Did families and providers understand the benefits of ORS treatment? Did RMPs have sufficient access to the drug to prescribe it? What else could be driving the low uptake of this critical drug?

In the first phase of our work, Surgo analyzed and integrated insights from several surveys, including a state-wide, large-scale quantitative survey of caregivers and a “mystery client” survey. This enabled us to map and understand the ORS treatment “cascade” – each step along the child’s path from having diarrhea to visiting an RMP, being correctly diagnosed, receiving ORS, and using the treatment. Our goal was to see where the largest drop-offs occurred on the path to ORS use.

The phase 1 research found that RMPs had ample access to ORS in the open market, which meant that the direct retailing of the product by NGOs was not filling the previously hypothesized gap. Surgo also identified a stark “know-do gap” among RMPs when it came to dispensing ORS to children with diarrhea. Around 80% of the RMPs knew they should use ORS, yet only 20% of children with diarrhea received ORS directly from RMPs. In essence, even though a majority of RMPs knew ORS was the right treatment, they weren’t prescribing it. These findings showed that the theoretical underpinning of the original project was not correct – lack of access to ORS and a knowledge gap among RMPs were NOT the main barriers to ORS use. 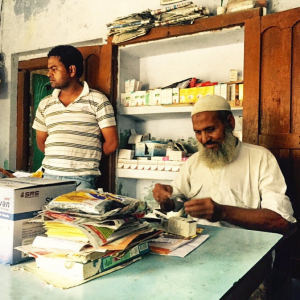 In phase 2, we undertook ethnographic research with RMPs and their mentors, and with caregivers, to better understand the “why” of low ORS uptake. We aimed to capture their views, practices, motivations, and treatment decisions. Our research allowed us to develop hypotheses on the mental models, beliefs, and emotions of both RMPs and caregivers. We found that caregivers judged the effectiveness of a treatment by how quickly it provided relief to the child. This led them to prefer antibiotics, which relieve symptoms even though they do not treat the diarrheal condition. Caregivers also held strong beliefs about the efficacy of medicines based on what form they came in: powders were seen as least effective, pills, syrups, and injections as better, and intravenous drips as best of all. In sum, because ORS was a powder, caregivers didn’t perceive it as an effective treatment.

These insights provided Surgo with a basis for our phase 3 research, in which a specially designed decision-making game incorporating behavioral-science concepts was used to identify and test the factors driving RMPs’ treatment decisions. We found that the behavior of RMPs was determined by a trade-off among three considerations: economic insecurity, the desire to make money, and the desire to provide the right treatment. Since people were unable to pay large sums to RMPs, there was fierce competition among RMPs to get as many patients as possible, and to retain their loyalty. This was where economic insecurity and the wish to make money came into conflict with prescribing the best treatment. In an effort to appear “expert” and meet caregiver expectations (and thereby retain their business), many RMPs focused on providing immediate relief for the symptoms of diarrhea. This meant prescribing IV fluids, injectables, and antibiotics – and avoiding ORS, even though this was in fact the correct treatment.

With this deep and nuanced understanding of what was driving ORS uptake, we developed a radically revised theory of how to increase the use of ORS to treat diarrhea in children. Instead of focusing exclusively on RMPs, programs should create demand for ORS by reframing caregivers’ perception of the treatment. This would help RMPs to bridge their “know-do” gap and prescribe ORS with confidence. We recommended a portfolio of new interventions, including:

Collectively, these strategies led to an increase in ORS uptake in UP from 30% to 50% in under two years. Our approach to getting a deep and nuance understanding of the ‘why’ before jumping into solutions has significant implications for diarrheal treatment and child mortality programs globally.

This program was implemented in partnership with the Bill & Melinda Gates Foundation, which funded the ORS delivery program in UP, and the Clinton Health Access Initiative, which implemented it. The study was designed, led, and analyzed by Surgo Foundation. We thank Ipsos and Final Mile for their contributions to the research. 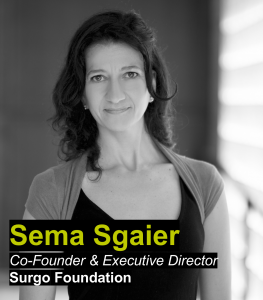