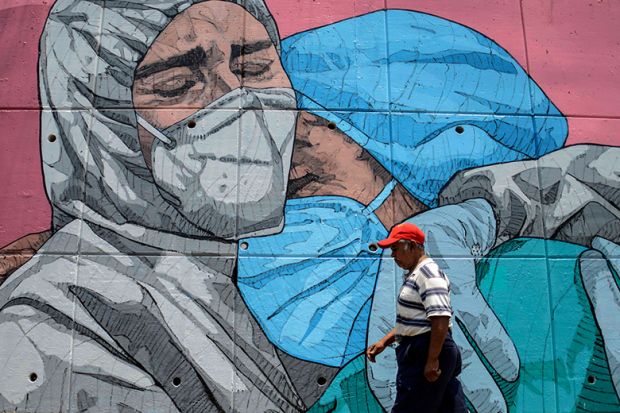 Let us picture ourselves one year ago. Words like pandemic, lockdowns or new normality, would have sounded as science fiction jargon to most of us. Yet, in September 2019, we happened to conduct a survey across the Americas asking thousands of doctors about how prepared they saw the region to face an epidemic.

The topic was suggested by Save The Children field staff as one of the relevant queries around health priorities. We were of course, completely unaware about how prophetic these answers could turn out to be when for instance 6 out of 10 doctors in both Latin America and US stated that these areas were little or not at all prepared to face an epidemic.

With this precedent, and in the light of the outbreak, we decided to start in March a specific program addressing COVID-19 concerns in Latin America.  By that time, very few cases were reported, and the disease seemed something happening mainly in Europe. However, by the end of May, WHO reported that Latin America outpaced Europe and the US in number of new daily cases. Brazil became the second most affected country in the world and as we write these lines, the country still holds that position.

In LatAm, early lockdowns have been useful to avoid a rapid peek. These strict mobility restrictions have compensated the lack of strong health infrastructures, as the ones in Europe, especially considering that even in some European countries these resources were put beyond their own limits

This delay provided governments with critical time to improve their local hospital resources. This relative progress was even acknowledged in our tracking surveys in most countries in the region, with the significant exception of Brazil.

However, the situation has not yet stabilised and is not clear when the peek might be reached. Even if happening soon, is showing to be a longer process than in other geographies. Furthermore, maintaining strict restrictions for a longer time is also likely to result in a deeper economic impact.

Perspectives from the frontline

In this webinar we have aimed to analyse the pandemic from the standing point of physicians. In an unprecedented data collection effort over 10,000 doctors in 16 countries in Latin America have shared their views.

Results have shown that HCPs have raised two major concerns: Fear of infection (for themselves and their families) and worries about the abrupt fall of the number of patients they are caring, which in most countries are over half the number they used to see before the pandemic. This obviously impacts them economically but also worsens their patient conditions, due to lack of controls, or late diagnosis.

We specifically tracked the estimated patient adherence and according to physicians roughly only 60% has been able to have a proper compliance to their treatments under the current circumstances. And we are not just talking of somebody needing new lenses or thinking about taking an aesthetic dermatological procedure. The same low adherence level is being experienced by patients that are bearing diseases that can be life threatening without proper treatment such as cancer, HIV, diabetes or serious respiratory or cardiological diseases.

Another insight of our survey is that these groups of patients are not only lacking adequate treatment but are particularly vulnerable against COVID-19.  Seven out of ten hospitalized patients by HCPs in our survey, share one of these preexistent conditions. The survey specifically highlights the situation of diabetic patients. These are estimated to be around 9% of the Latin American population, according to public prevalence data, however, we found in our survey that they represent almost 40% of the hospitalized patients with COVID-19. While most governments in the region have properly put emphasis in protecting the elderly, they have failed to show a similar protection and concern for these high-risk patient groups.

Of course, the medical profession is also acknowledging turbulences. In previous research in the region, we have identified the doctor as a vulnerable link within the healthcare system. They had to manage a more informed patient, new technologies and new treatments but with limited resources in systems that offer a restricted access to the best possible treatments. Doctors used to claim they were bearing too much pressure, too little income and felt undervalued compared to earlier generations of doctors.

So how has the pandemic changed this? Well, most professionals stated that the pressure in their work environment has increased. This is most noticeable among those on the front line who are fighting the disease under risky conditions, but really affects all kind of professionals who agree that there is an extra burden in calming down their stressed patients.

On the other hand, almost half of all physicians also see a decrease in their income.  The citizen clapping that has been performed at nights in several cities in the region could suggest the appreciation has increased, but overall doctors perceive that it had a minor impact and that the appreciation has not really changed.

So, let us summarize: less patients, less income, higher risk of infection, more pressure… This definitively should have an emotional impact on anyone. And indeed in this context, it is not surprising that more than 9 out of 10 physicians recognize that the pandemic situation has impacted them emotionally suffering one or more of the following symptoms: Fear of personal or family infection, anxiety, fatigue, sleeping difficulties, feeling of isolation, stress, uncertainty, or irritability. Among those on the front line, fear of family and personal infection and fatigue were even significantly most relevant. 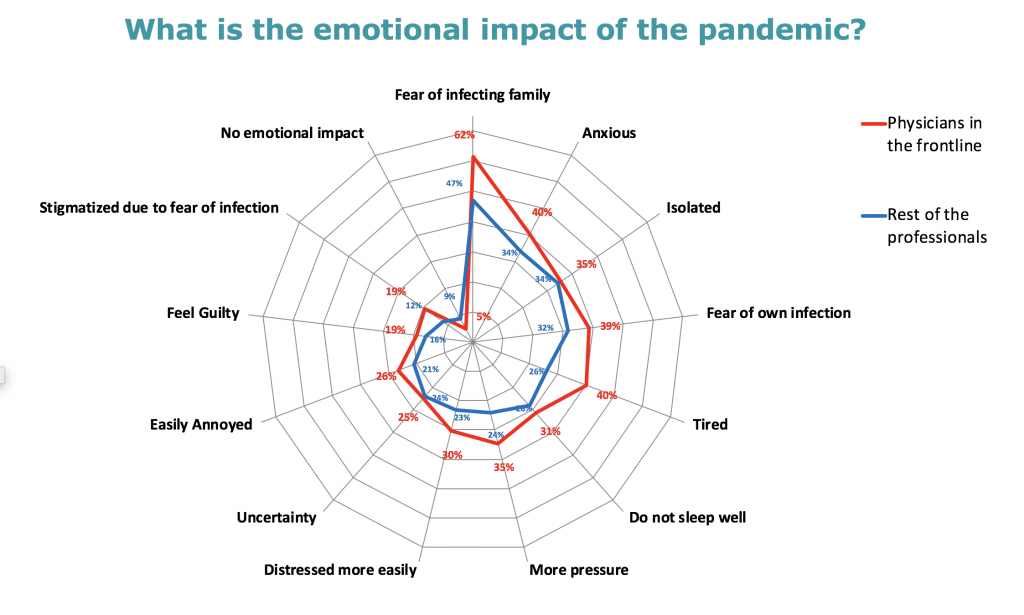 Finally, the project also explored in how doctors framed the future. By late July, professionals estimated that it would still take about 5 more months for the situation to be under control and for the population to return to their activities with minimal restrictions. This time has extended from the 3 months estimated in March, or the 4 months in May.

Physicians believe that massive testing capabilities would demand in average six more months and we shall wait one year for the availability of effective drug treatments.

On the bright side the vaccine is looking closer. By the end of May the vaccines were perceived as distant and not available before the following 19-months window. Two months later, doctors estimated collectively that an effective vaccine would be available within a year.

Conclusions and lessons for researchers

This research turns on a red light about the need to take action to protect those who protect us, generating specific demands for the different stakeholders.

For the health authorities, to provide the training, the financial support, the equipment, and the protocols that can make the healthcare system to improve its performance considering the current restrictions.

For the professional associations, to build an improved engagement with their own members helping with training and support.

For the health insurance plans, to take and play financial responsibility.

For hospitals and clinics, to combine protocols that can enable patient care and prevent local infection.

For the pharma industry, other than the obvious demand to develop specific products for COVID-19, there are opportunities to generate communications and actions that can generate empathy with the doctors and work with them and their patients to address the restrictions to treatment adherence, drug access and consultations.

This project has also been an incredible source of learning for market researchers.

Firstly, to check the augmented potential for new alliances. The impressive sample sizes we got in this project would have not been possible without the kind support of Save The Children and ESOMAR Foundation. By endorsing the not for profit nature, these partners facilitated the collaboration of thousands of doctors. These professionals are usually paid to participate in surveys, but we have learned that when approached in the right empathetic tone and with a clear not for profit message, they can generously provide their opinions without any compensation other than a copy of the results.

And alliances can also grow inside our own industry. Accessing best of class platforms and fresh ideas have been possible due to the generous collaboration to this initiative of researchers from Toluna, Reckner Healthcare, Ipsos, Confirmit, Delvinia, Datum, Provokers, PBG, Observatorio 1987, YouUniversal and Unilever among several others.

Secondly, to recognize the opportunity to revisit our methods and technologies that COVID-19 is accelerating. Pressed with limited time and social distancing requirements, we chose to base our exploratory stage using CRIS a virtual moderator platform developed by Delvinia a Canadian colleague. CRIS, was not only able to “chat” with 83 doctors in 5 days but also to unveil many of the emotional challenges that doctors face, which were later confirmed by our quant survey.

But talking about re thinking our technologies,  what impressed me most was when our guest participant at the webinar, Ana Maria Mendez, National Fundraising at Save The Children Colombia shared how they were dealing in the current context to teach kids in the poorer areas in this country. In some rural areas, internet is scarce and sometimes there is no even electrical power supply. So rather than using fancy new virtual platforms, this fantastic team creatively found a solution in a technology that has been with us for over a century and started running remote classes by radio.

Finally, during the whole process we could also witness the deep social need for understanding. The results have enjoyed widespread reception in the media of dozen countries, something that is quite unusual for a HCP survey focused in healthcare topics. This is a confirmation that in spite of the known economic challenges for our industry, more than ever we have the unique opportunity -and responsibility- to give voice to our audiences and offer a compass to support the unprecedented sailing in these uncertain waters. 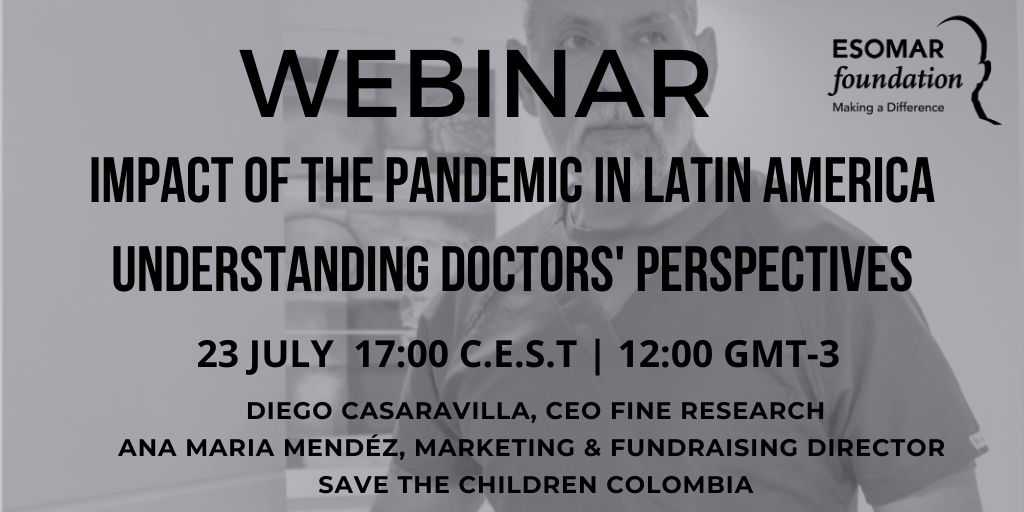 In September 2019, Fine Research began an unprecedented study in the region of challenges in the medical profession. Two months before the pandemic outbreak in Wuhan, their team asked doctors in North and Latin America about the health situation in their countries and their level of preparedness in case of a calamity. With the start of the pandemic, Fine Research decided to start a series of projects on #COVID19. The latest piece, completed in late May 2020, involved a large-scale fieldwork in 16 countries, interviewing over 5000 physicians in Latin America with the aim of understanding the main challenges they face in the midst of the pandemic.

The project, which was shared in the media in several countries in Latin America, details the impact of COVID-19 in the region grouping insights into four main axes: assessment of policies, evidence on the pandemic, impact in doctors and future scenarios.

For this webinar, Diego Casaravilla, Fine Research Director will be joined by Ana Maria Mendéz, National Fundraising Director, Save The Children (Colombia).

You will discover answers to:

– What were the main health priorities before the pandemic?

– How do doctors rate hospital infrastructures and country policies?

– What are the new professional challenges for doctors?

– How has the current context impacted doctors emotionally?

– How has the pandemic affected treatment adherence for Cancer, HIV or Diabetes patients?

– What future scenarios do HCPs imagine will be likely to happen?

Attendees will have a better understanding of the near term, and longer-lasting consumer impacts and changes as a result of COVID-19. 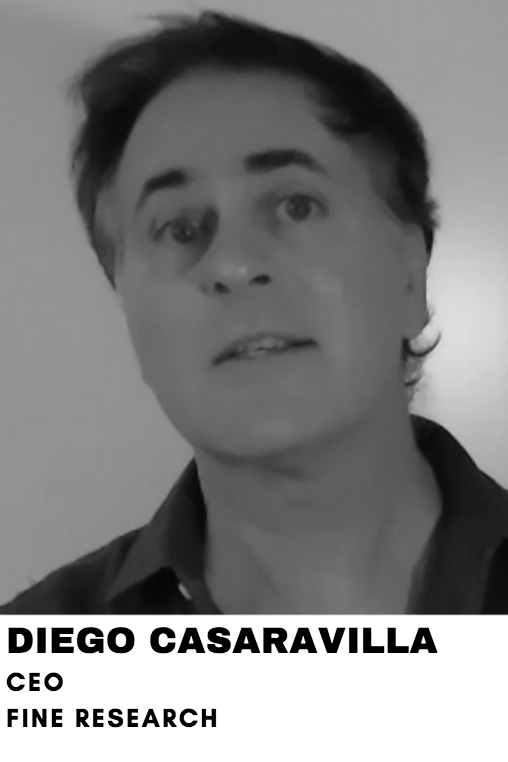 Diego has founded and fully manages Fine Research, an independent MR data collection network in Latin America with offices in Brazil, Mexico, Colombia, Argentina and Uruguay. His agency focuses on healthcare., consumer and b2b fielding. Created in 2008, Fine Panel, is the first and largest panel of Healthcare professionals in LatAm with over 100,000 active members in this region. 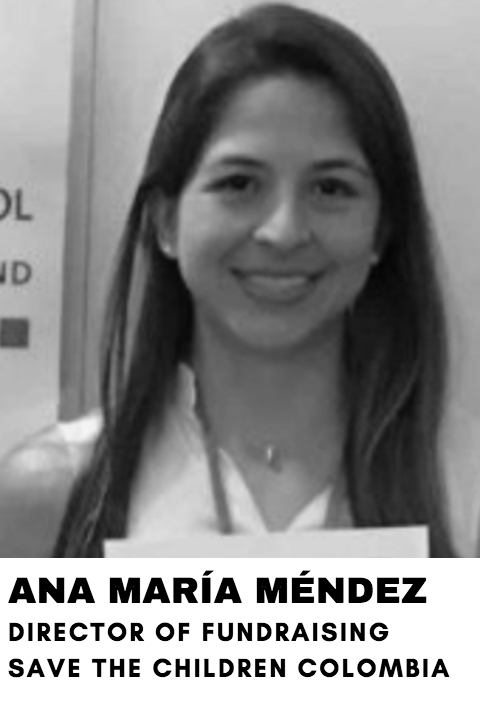 Ana Maria is Marketing and Fundraising Director of Save The Children Colombia. She holds and MA in Marketing and over 6 years of experience in the sector and has coordinated the launch of several marketing campaigns that yielded over 250% annual growth in funds raised over the past three years.