On 25 September 2015, the 193 countries of the UN General Assembly convened in New York and adopted the 2030 Development Agenda. This was the beginning of the Sustainable Development Goals (SDGs) campaign, which was supported by numerous organizations and social movements. The SDGs  encompass 169 targets summarized in 17 Global Goals. The first Goal is “No poverty”, which aims to end poverty in all its forms everywhere.

Based on World Bank figures, the world is already halfway in eradicating extreme poverty. In 1990, 1.9 billion people lived on less than $1.25 per day. By 2015, this number had dropped to 836 million, a decrease of 56%[1]. The decrease has been most impressive in South & East Asia and the Pacific Region. 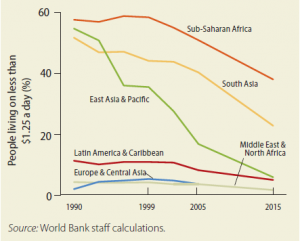 The main question is to which extent the general public is aware of the steep decline in extreme poverty and how awareness can be raised. The purpose of the research project is twofold. First, we aim to contribute to a better-informed discussion on the progress in poverty alleviation in order to help generate momentum for the SDGs campaign. Second, we seek to identify and profile promising groups in society – the frontrunners – which can assist the SDGs campaign in engaging more people globally. Values-based surveying makes it possible to identify frontrunners around the globe, understand who they are, what motivates them and what kinds of narratives the Global Goals  community (mainly governments, charities and involved companies) can use to resonate with the frontrunners and possibly turn them into ambassadors of change.

Motivaction International conducted the second Glocalities survey in 24 countries among the general public. In the syndicated survey various questions on poverty and the SDGs were included. The outcomes show that 87% of people around the world are unaware of the steep decrease in extreme poverty, believing instead that global poverty has either stayed the same or increased over the past 20 years. Only 1% of people across the globe actually know that extreme poverty has halved, as is the case based on the World Bank figures. 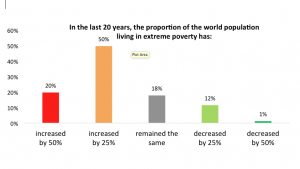 The huge discrepancy between people’s perceptions and reality indicates major challenges in efficiently communicating progress in the fight against extreme poverty.

The research was set up by Motivaction International and took place between December 2015 and February 2016 in two phases. Motivaction worked closely together with international fieldwork partners SSI and Lightspeed GMI.

In the first phase of the survey, 56,409 respondents from 24 countries participated[2]. In this phase the questions that we use for building the values based models and instruments were incorporated. The questions about the SDGs and poverty were posed during the second phase of the project, in which 26,492 re-contacted people from the first phase completed a follow-up questionnaire

The Glocalities database contains more than 2,500 variables covering a wide spectrum of people’s lives, values, preferences and behaviors. When analyzing data, we employed triangulation – using multiple instruments – in order to validate findings and offer robust insights. We used the following tools in the analyses:

Preparing, writing and releasing the report was a journey in itself. Due to the aim of the project to have impact and raise awareness, we asked several experts from academia, governmental bodies and the charitable community to contribute to the report by giving feedback and advice. The experts consulted include among others Jan Peter Balkenende, former Dutch Prime Minister, Karel van Oosterom, the Dutch Representative at the United Nations in New York, Herman Wijffels , Professor of Sustainability and Social Change at Utrecht University, Matt Grainger, Head of Media at Oxfam International and Michael Sheldrick, Advocacy Director at The Global Poverty Project / Global Citizen. The survey was supported by the Bill & Melinda Gates Foundation. We released the report in partnership with Oxfam International and Global Citizen with the objective to help shape anti-poverty work.

The report was launched in New York on 22 September 2016 on the occasion of the first anniversary of the Global Goals. The findings were presented to a highly motivated group of young activists from across the globe, in cooperation with Global Citizen. The full report, the press release and an animated movie clip with the outcomes can be downloaded at http://www.glocalities.com/news/poverty.

The findings in the report are valuable for the charitable community in several ways. First the results make clear that the vast majority of people around the world believe that global poverty has either stayed the same or gotten worse over the past 20 years, when the exact opposite is true: it has more than halved. The scale of pessimism and misunderstanding could threaten the tough job of pulling “the second billion” out of extreme poverty.

Oxfam Campaigns Director Steve Price-Thomas said in the press release of the report:

“The halving of global poverty is the biggest unsung success story in recent human history. The achievement shows what is possible – but also highlights what remains to be done. We still have a long way to go and need public energy now more than ever. The success could start to reverse quickly if we don’t tackle with equal passion the rise of inequality and abuses driven by conflict, land grabs and climate change.”

“These findings bear out the fact that more of our supporters are coming from countries where great transformation or high economic growth are taking place. For example, in the top 10 countries represented on one of our Facebook channels, among the 156,000 followers are from India, Pakistan, Bangladesh, Nigeria, The Philippines and Kenya. The key is now providing those who believe their actions can make a difference with a way to get involved and to help, including by raising awareness amongst other parts of the public.”

‘’Now we are half way to eradicating poverty, it is time for more enhanced public engagement strategies to help finish the job’’.

People’s opinions and knowledge about the developments with respect to extreme poverty differ depending on who and where they are, what they do and what they believe in. The report proposes smarter new ways for governments, donors and NGOs to engage different people in different countries.

The research resulted in a clearly-defined profile of the frontrunners (full description can be found in the report). For example, these people often already occupy influential positions in society, leadership and the business community. However, in order to gain the highest leverage and really make a difference, it is imperative to promote initiatives that are proven effective. Most importantly, the analyses reveal that storylines and frames which have a strong fit with the ‘ruler’ archetype (setting goals and working towards realizing them) are appealing  among the frontrunners, while people from the charitable community more naturally resonate with storylines conforming to the ’caregiver’ archetype.

Secondly, information about the frontrunners’ lifestyle and media usage was included, which allows identifying promising channels for communications. We recommend, for example, to start with launching a collaborative platform for the Global Goals.

The creative communications material below this blogpost (an animated movie clip and a shareable infographic developed by Motivaction) contributed to the sharing of the findings by the partners.

Motivaction shared the report with the executive office of the Secretary General of the United Nations and the Special Adviser on the 2030 Agenda. With the help of Oxfam and its local affiliates the report was covered by Reuters and newspapers around the world. Examples of publications include:

The New York Times column by Nicholas Kristof, which was inspired by our survey findings, caught the attention of Bill Gates, who posted a the following tweet about the topic: Bill Gates. 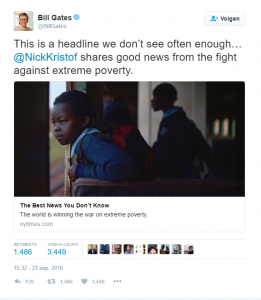 For more information about the survey: www.glocalities.com/poverty 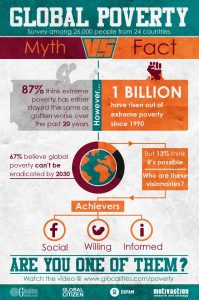