From year to year, the Ukrainian society has been waiting for substantial transformations in the country, which would improve the standard of living. However, people often do not support the reforms, which could contribute to the quality of life. This happens mainly because many Ukrainians are sensitive to populism.

Populists act against the reforms and often receive wide support. They use manipulations, stereotypes and cognitive biases to promote ideas aimed at preserving their status quo or getting benefits for small groups at the expense of long-term interests of the whole society.

The project “Critical Thinking Against Populism” was initiated by the Center for Economic Strategy. The project targeted the most common populist stereotypes in the five reforms that have been identified as high-priority areas by the government and international donors: land reform, pension reform, education reform, health reform, and privatization.

The main project goal is to promote reforms and anti-corruption initiatives, and fight populism by developing and implementing an effective advocacy campaign based on the principles of critical thinking. 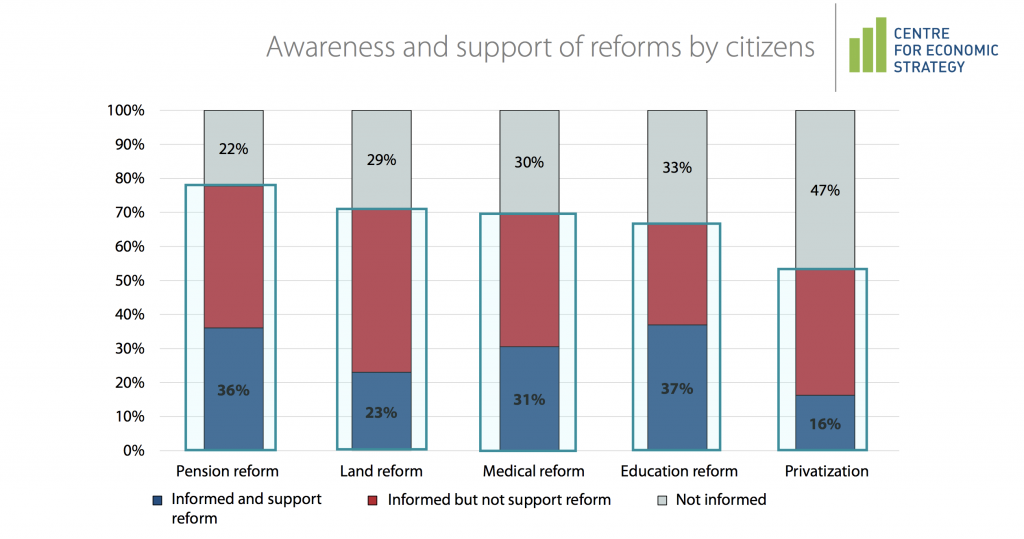 A representative survey of Ukrainian citizens was conducted by GfK Ukraine in order to find out what risks people are most afraid of when thinking about the reforms. We evaluated whether those risks are stereotypes or threats that should be effectively addressed when correcting the implementation of the reforms or when communicating them to the public.

The research provides the following data for each of the reforms:
• evaluation of public awareness of the essence of the reforms,
• degree of overall public support,
• support of the key components of the reforms proposed by the government,
• assessment of risks’ probability.

The survey was conducted via random dialling the mobile telephone numbers (according to the face-to-face surveys, 92% of Ukrainians use mobile phones). Unlike face-to-face surveys, this method provides the pure random sample and reaches active educated citizens better than face-to-face interviewing method (because active educated citizens more often live in inaccessible apartments for interviewers and can be more rarely found at home comparing to the rest of the population). The sample is representative to the adult population of Ukraine by gender, age, region of residence and the size of the settlement according to State Statistics Service of Ukraine data as of 1.01.2017 (excluding the occupied and uncontrolled government territories). The maximum theoretical sample error is 2.2%.

As a result of the project, the Ukrainian public acquired critical thinking tools to counteract populist biases, fostering broader support of reforms and anti-corruption initiatives undertaken by the Ukrainian government.

As a result of the performed activities:

·     The ministers and their staffers, the office of Prime Minister and Reform Support Office have received key messages and analytical toolkits based on the principles of critical thinking to be used for the communication strategies for promoting reforms in education, healthcare, pension, land and privatization;

·     Experts and civil activists have acquired critical thinking tools for counteracting populist biases by distinguishing between the facts and manipulative statements;

·     National and regional media acquired anti-populist arguments for dissemination among the general public;

·     Key reforms and anti-corruption initiatives have gained a broader support base among the general public.

*The survey was conducted by GfK Ukraine using telephone interviews and focus groups in July-September 2017.